skip to main | skip to sidebar

Another sad case of art theft

Kind of sickening really. Read about it here and take time to complain to the Alliance for Young Artists and Writers (info@artandwriting.org___or___a&wGeneralInfo@scholastic.com) if you have a spare minute.

My new blog for WFB/Fantasy stuff. I'll carry on posting Sci-fi related material here. The new blog will be a little different, with a more warts and all flavour. Also there will be a fair amount of cross-posting between the blogs. I'll be building a Tzeench-alligned Hordes of Chaos army, like WFB Chaos used to be the last time I had any interest in it. Of course this means there will be a lot of beasts and monstrous creatures, perfect for =][= (despite the square bases!), I've included pictures of some of the miniatures that I intend to paint, some of which I already own, some of which I plan on getting along the way (I rather like the new GW minotaurs after initially finding them not at all pleasing, I imagine I'll be painting a fair few of those eventually). There's loads of 54mm fantasy stuff out there that will look great in a WFB Horde. It's a shame that there isn't such a depth of quality in the 54mm sci-fi genre, but this is life.

Of course this means that there'll be less updates to this blog, but I think this is a good thing. I'm really enthused about this new blog, something that's been entirely lacking from my =][= stuff lately, I know it will get me out of this painting rut. =][= is still my favoured realm, but I need a little break from it in order to refresh my enthusiasm.

Also I'll be running a little raffle after I get the new blog up and running, probably some GW vouchers as a prize, so stay tuned for that! 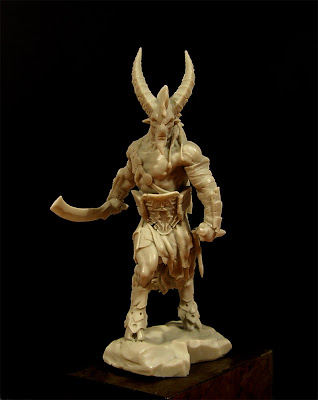 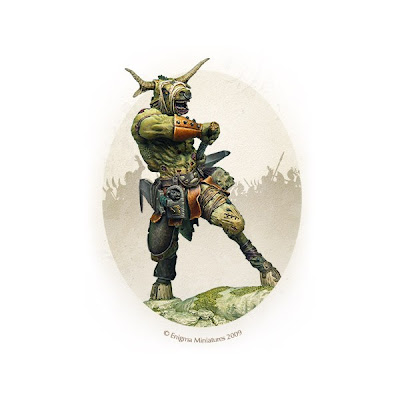 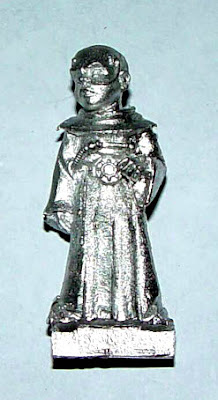 Readers may have noticed that I've been away for a while. In truth I was only away for a little over a week, but since getting home a couple of weeks ago I've been unable to bring myself to paint. Not quite sure what the problem is but I think it's partially due to a semi-disastrous spray job on my latest miniature. I tried a white undercoat and got the dust problem. I've decided I'll strip and restart but that means getting some new pieces to replace the ones that will be probably damaged in the process (hands, spear head etc). In the meantime I've decided to start something fresh. The familiar should be a good place to start, it won't take to long to paint. I'm also going to try a white undercoat on this miniature too. Any regular readers wondering about the sniper, well that one seems to be cursed. Built it ages ago, took it apart, rebuilt in a new pose, and now it sits half painted. I'll get back to it eventually, but I'll be doing an Arcoflag before I return to the sniper (Judge Dredd artist John Hicklenton died while I was away and since, iirc, the arco owes so much to his vision of Mean Machine I feel that it's only fitting).
Posted by Ferran at 22:21 5 comments: 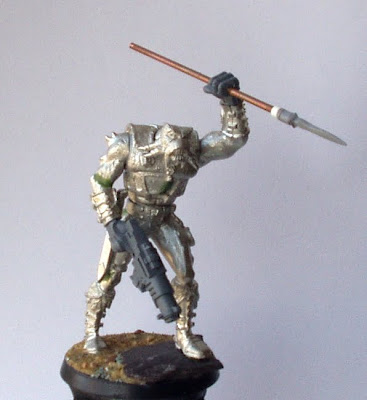 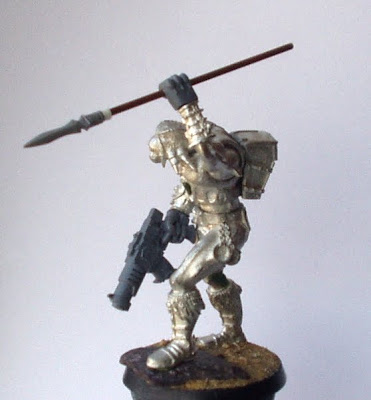 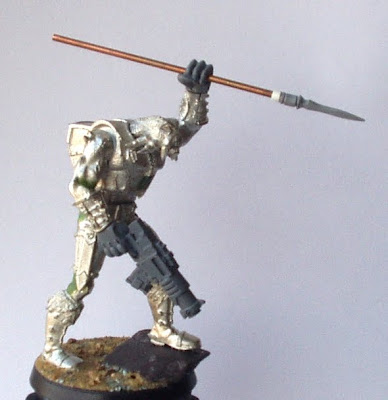 This is the third model for the Second Circle group, an alien hunter of some sort. I wanted to have him really tooled up with weaponry and did intend to give him shock gauntlets but I forgot to drill the bits before I glued the hands. The metal on this miniature (and all the Krashrak models that I am aware of) is really tough so I won't bother now. I'll probably give him a load of grenades and some toxins instead.

The spear is called Curruid so I decided he would have a tooth as his charm.

Also I'm going away on Tuesday so I'll be racing to finish the sniper and get as much of this guy painted as I can before that. I've also decided to get back into computer gaming a little as my hardware is grossly under-used, so I bought Mass Impact. I have barely any spare time as it is, so it's doubly important to get some painting done before I start the game :)
Posted by Ferran at 12:24 3 comments:

Really dire pics I know (even the angles - for some reason the main facing pics were very blurred) but I intend to get some good ones tomorrow or the next day. I'll take the minis outside to get some proper light (so far all my pics are taken on the window board of my lounge). I'll do this with all my minis I think, the weather seems to be improving, just need a windless day with nice Spring light.

This guy should have a backpack from the Covenant model, but the pin I used is too long (or rather the hole in his back isn't deep enough) The only miniature pliers I have are flat, so I'll have to get some decent needle-nose pliers tomorrow and replace the pin. 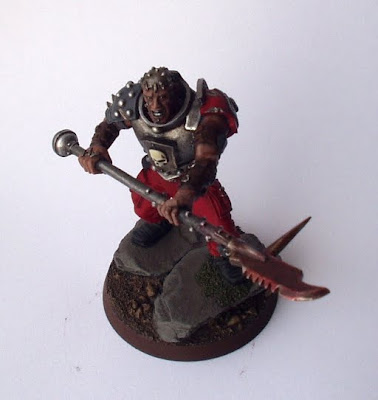 The red in particular is very washed out. The silver on the carapace is just crap, I need to improve my technique because I have 2 fully armoured characters to include in this retinue, both will be silver, and one of them is my uber =][= Lord, so I'll have to do some reading up I think.

Also final pre-paints on the sniper. The supressor on the rifle probably shouldn't have a hole in it(?) I'm not sure, but I drilled it anyway. It would probably look nicer with 2 holes, but if I drilled another the chances are that they won't line up exactly so I'll leave it. 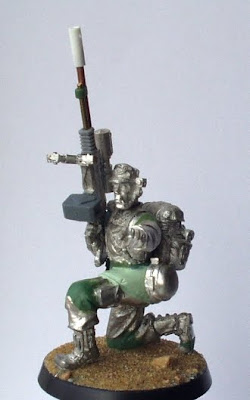 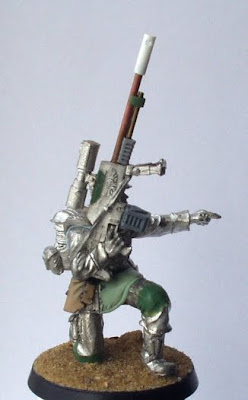 Finished my Crusader on Monday, so I expect you'll see him on the weekend. I shouldn't really be putting ETAs on pics, I imagine it could be tedious for anyone wanting to see them when they inevitably fail to arrive on time :( anyway, Saturday....I promise.

Until then here's a sneak peak at the next character, Charles Whitman. I'm not yet sure whether the gun will have a supressor - it's a little over-powering as is, I had originally intended a lighter, sport style rifle. Also, vertical gun, or dipped slightly, as in the pic? Hmmmm.

"Crazy Sniper" is a bit of a cliche imho, so instead of making him an unbalanced character I decided he'll be a normal soldier with the name of a real-life psychopathic sniper. Should be a quick paint, black and grey (as part of the original retinue - probably the last member).

After that...well, I have a number of characters crying out to be built. Current front-runners are an Arcoflaggelant, a plasma-wielding maiden of vengeance based on the Daemonhuntress, a Chaos Magus, or one of his minions, a cultist. Which will it be? Only time will tell :) 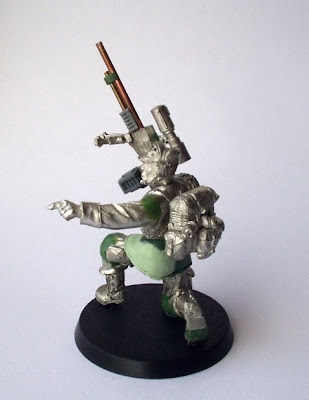 Hey yall. It's been a slow week but not without reason. I decided to paint up my previous entry as a tutorial. This caused a lot of down-time (on that particular model) due to having to wait for daylight so the photos are nice. Hopefully it will be worth the wait!

In the meantime I've uploaded some old pre-paints. These guys have been sitting on a shelf for some time, and are the the core of a Rogue Trader retinue. I can't give an ETA on these guys as the RT group isn't high on my list of priorities at the moment - after Second Circle I'll be finishing off the Hunters (that's the group featured in the blog header) with the inclusion of a sniper, then I'll be making a group of adversaries based around the Chaos Magus and Daemonhost. I'll also be making a Spase Marine at some point. I'm anticipating that all of these paints will take a few months at least, but hopefully we'll see the RT warband before 2011.

Stay tuned for the next entry though, with any luck it will be midweek some time! :) 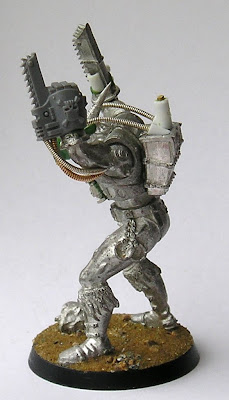 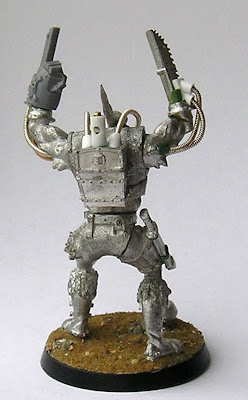 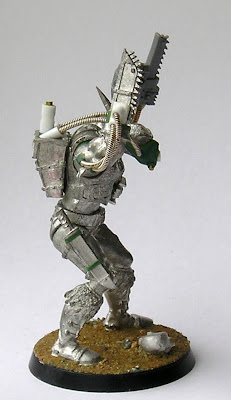 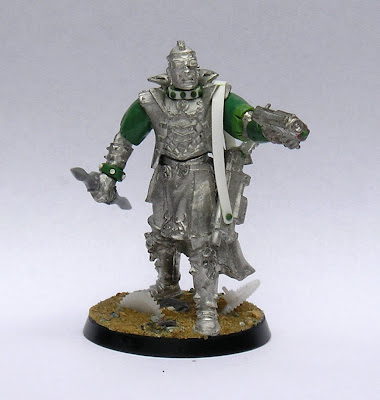 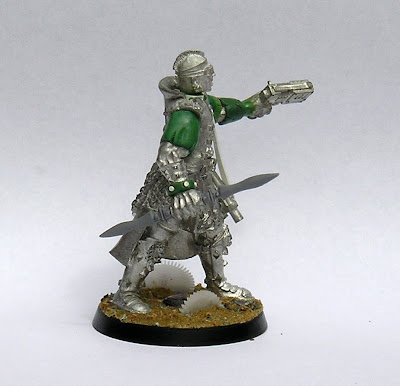 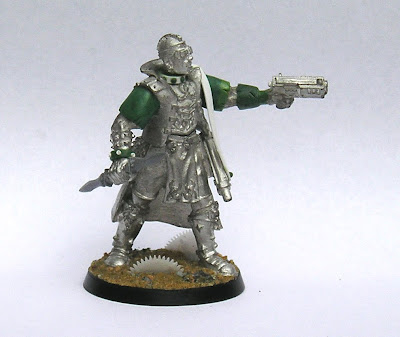 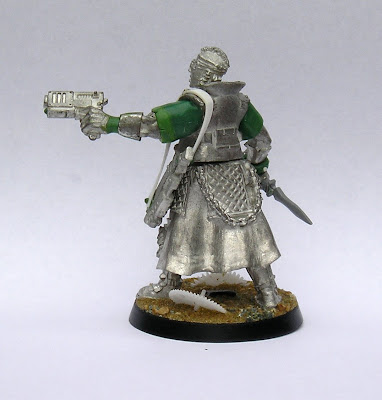 Hello all, here's the latest member of my current warband Second Circle. This guy is Erazmus, an ex-pitfighter turned guardsman turned Penal Legionairre turned Heretic killer. With quite a history I plan on writing a detailed background. This isn't exactly what he'll look like (explianed after pics for anyone that wants to read) but these are the only pre-paint pics I'll take, after the final conversions I'll start painting straight away. 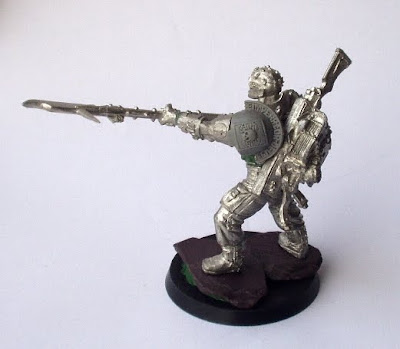 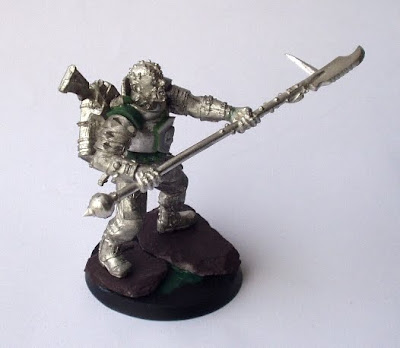 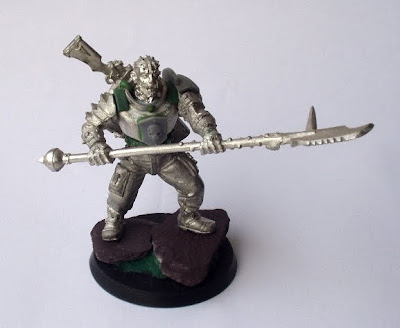 As usual this miniature isn't exactly as I envisioned but is close enough to be satisfactory.

I always thought that the Sgt. Stone (base model) legs looked a bit awkward until I made this model with different legs and realised that the originals are quite appropriate. With that in mind I would have been better off bending his left arm at the elbow to change his stance slightly but I was too far into the build by the time I realised.

Even discounting this, he still looked a little "off" when examined closely. I decided that it was his right arm being positioned a little low on the torso (or his left a little high, depending on how you look) so I'll be adding extra padding to the shoulder before I paint, hence the finished product will look a little different to these pics.

When it came to the torso carapace I had a number of options. I could have comfortably sculpted an Inquisitorial =][= to the armour surface, but given that I had to remove one to make the conversion (superior to any that I could have sculpted) this didn't seem right. Other options were FW brass (Aquila, CruxT etc) but in the end it came down to 2 choices. Eventually I decided on this "Soul guard", a device consisting of Pentagramic wards inscribed underneath a plate of abletive armour, providing protection to body and soul, appropriate for Erazmus' vocation of dedicated holy warrior. The other option was many studs, as seen on the classic RT marines. I've always liked the RT studded look, so will use it on the planned shoulder pad.

People who liked this also liked...